Blur is a new NFT marketplace that charges no fees and allows you to list your NFTs for sale. The
marketplace recently announced on Twitter that it would airdrop $BLUR Care Packages to traders who
persisted in bear-market NFT trading. The care package will also be accessible to those who list NFTs on
the Blur marketplace. In this article, we will be talking about what blur.io is and how to get its airdrops.

Blur.io is an NFT marketplace targeted at experienced traders. It eliminates the hassles associated with
trading NFTs and has no problem carrying out transactions ten times faster than Gem. So far, it’s the only
platform that allows cross-marketplace listing and sniping, as well as managing your portfolio. A team of
experienced individuals from Citadel, Brex, Y Combinator, MIT, Twitch, Square, Five Rings Capital, and
others built it.

Blur.io has the sponsorship of Paradigm, Keyboard Monkey, OSF, and several others; and raised over $14
million in total for the project. While it was still in hidden development, aggregators have seen the
second-highest volume. And thanks to its zero marketplace fees until its release next January, it shows
great promise. The creators want Blur.io will be a marketplace owned and governed by the entire NFT
community.

The way they plan on accomplishing this isn’t clear. They stated in their blog that the airdrop process
ensures that traders who utilize Blur frequently receive the most significant number of tokens and have
the most influence over the protocol. Hence, it is safe to say that the more Blur tokens you have, the more control you will have over the protocols when it launches on January 1st, 2023, and so too the Blur token.

Blur is a platform with an innovative royalty system that enables creators to get more revenue for their
work. Traders who honor royalties will receive a higher percentage of the airdrop than those who don’t.
How rare your care packages are on Blur depends on your loyalty metrics. Loyalty provides a comparison
of all of the NFTs you have listed on Blur with those on other marketplaces. Take a look at this article for
more information on how loyalty works.
Here: https://mirror.xyz/blurdao.eth/XgvGOFLwdxpdRIF2BRsQqngvcBw5WMuDOcwUK3KR1AE

Qualifying for a blur airdrop.

So far, they have announced two airdrops. Future announcements are to come in later days. The first
airdrop is for traders who have traded over the last six months. All you have to do to claim this airdrop
care package is to list an NFT in the next 14 days from October 19,2022. Each care package received
from all airdrops will only unlock for Blur tokens when it launches in January. Remember, the more Blur
tokens you have, the more control you will get over the platform’s governance.

The second airdrop will have higher rewards than the first. Actively trading traders who qualify for this
airdrop will receive more care packages than those of the first airdrops. You’ll be eligible to receive these
rewards if you have enough activity on the platform. The rarity of your care package will also depend on
how actively you list on it.

Their site doesn’t give a complete guide on what to do to qualify for airdrop 2. However, these are tips
that will help based on their handling. 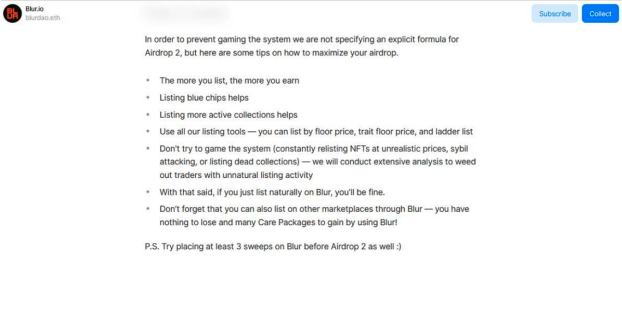