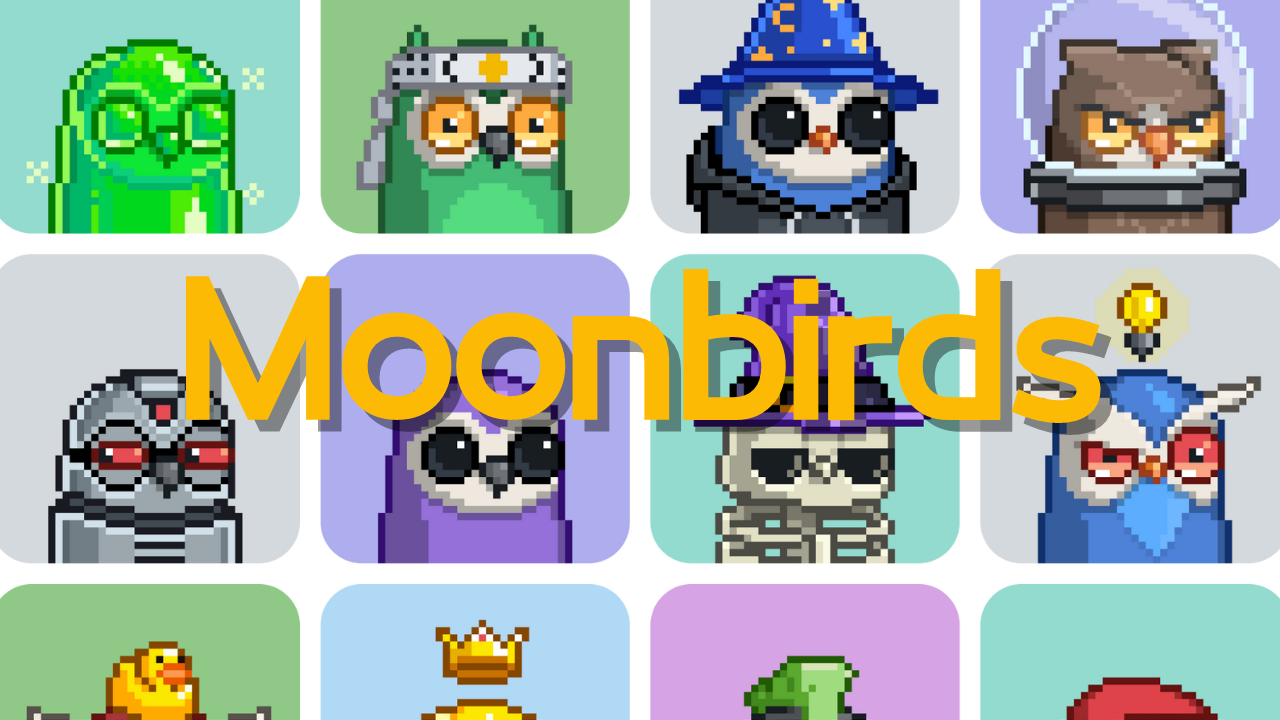 What are these NFT owls called MoonBirds

Moonbirds shot to the top of the list of the top ten highest-grossing NFT collections of all time in less than a week. The now larger-than-life project, a generative, large-scale avatar NFT venture, stunned the NFT community, reminding everyone that NFTs may still be a “blink and you’ll miss it” type of game.

Moonbirds appears to be well on its way to becoming a key contender in the PFP NFT market controlled by Bored Ape. So, what exactly is this new collection, and how did it get so big in such a short period of time? Let’s take a closer look at Moonbirds.

On April 16, 2022, a collection of 10,000 NFTs called Moonbirds was released. It was founded by Kevin Rose, a well-known American internet entrepreneur, as part of his newly formed Proof Collective, a private members-only group of NFT collectors and artists. Rose had already established himself as an internet star, investor, podcaster, and founder of news aggregator Digg, among other endeavors, prior to Moonbirds and becoming a significant figure in Web3/NFTs.

Despite the fact that the collection contains a total of 10,000 NFTs, the entire supply was distributed in three parts. Prior to the general sale, 2,000 NFTs were set aside for Proof Collective members to mint. Because the Proof Collective ecosystem has a total of 1,000 member passes, each token eventually provided two free NFTs for its owner. If you were one of the few Collective members who had more than one Proof membership pass NFT, this was a great offer.

A whitelist was used to distribute 7,875 NFTs to the general population. This list included the lucky winners of Proof’s nationwide raffle, which required participants to have 2.5 ETH (the price of one Moonbirds NFT) in their registered wallet at the time of admission. Apart from the reserves and the lottery, the Proof Collective admins kept the remaining 125 Moonbirds NFTs for future collaborations, marketing, and other purposes.

So, who came up with the idea for Moonbirds?

Kevin Rose was the brains of Moonbirds, however it’s safe to say that a large number of developers and general Proof members contributed to the final result. Justin Mezzell, the co-founder and CPO of the Proof platform as well as the artist behind the Moonbirds’ distinctive pixel-art aesthetic, is one of these members.

Because the thousands of NFTs in the collection have a wide range of qualities, Mezzell and the rest of the art team generated hundreds of unique randomized aesthetic traits to create a set of generative NFTs. Following in the footsteps of pixel-art forebears like CryptoPunks and CryptoSkulls, as well as PFP powerhouses like Bored Apes, these are ultimately sequels.

What makes them so popular (and pricey)?

Only a few collections (such as Azuki and Doodles) have had substantial ripple effects across the NFT ecosystem in recent months. Moonbirds, on the other hand, has blown practically every other known PFP collection out of the water with its meteoric ascent to fame.

Moonbirds had already achieved a secondary sales volume of 100,000 ETH (roughly $300 million at the time) just a few days after its introduction. This is after the initiative received around 19,687 ETH (almost $60 million) through the public auction of the 7,875 raffle NFTs stated earlier.

Moonbirds has demonstrated the market domination of both PFP NFTs and famous NFT influencers on its way to shattering NFT weekly volume records. Moonbirds is a modest collection of pixel-art owls at its core, but the project’s ties to Kevin Rose and Proof Collective’s popularity are fueling the Moonbirds market.

To demonstrate the significance of this, consider the meteoric ascent of Proof Collective membership NFTs, which essentially signaled the start of Proof NFT activities.

PROOF COLLECTIVE PASSES PROVIDE A SYNOPSIS OF UTILITIES. PROOF COLLECTIVE CREDIT
Proof Collective Passes were first issued on December 11, 2021, with 1,000 NFTs sold at 1 ETH apiece. Collective Passes were billed as a membership card to everything Proof, with holders getting access to a private Discord, early access to Proof podcast episodes, in-person events, and other projects (including Moonbirds).

Throughout the rest of 2021, the floor price for Collective Passes fluctuated slightly, before gradually rising into the double digits, reaching a minimum price of 30 ETH (about $85,000 at the time) by February. A week after Moonbirds launched, the price soared to roughly 120 ETH (around $350,000).

If there’s one thing the NFT space has learned over the last year, it’s that success breeds success. Anecdotally, once a project (Bored Apes) or an artist/influencer (Beeple or GaryVee, both members of the Proof Collective) acquires renown, their projects and collections are likely to be valued correspondingly from there on out.

Similarly, as a project gains traction, a combination of influencer endorsements and FOMO (fear of missing out) prompts NFT aficionados to buy tokens from the project and stake their claim as a part of the now-expensive and ostensibly prestigious community. The NFT market’s hype cycle is as follows.

What does Moonbirds have to offer collectors in terms of utility?

The option to stake, or “Nest” as the project developers call it, an NFT is perhaps one of the most distinctive and significant of the “utilities” available to Moonbirds collectors. When you nest a Moonbirds NFT, you lock it (making it untradeable) without having to move it to a vault for safety.

Why, on the other hand, would you want to lock up your Moonbird? Because doing so will start a process in which your Moonbird NFT will gain more perks, reach new tier levels, and even upgrade their nest to become more profitable, resulting in even better drops and rewards.

A MOONBIRDS NEST EXAMPLE. CREDIT: MOONBIRDS
Moonbirds owners get priority access to future Proof NFT projects, including the upcoming Proof Metaverse, in addition to Nesting benefits. And this is after Moonbirds NFT holders have complete commercial rights to the NFT’s IP (intellectual property).

This means Moonbirds owners can use the artwork linked with their NFTs and construct a complete business around it, duplicating and profiting from it as they see fit. The Moonbirds group appears to have positioned itself well for any future copyright problems that may deter collectors from joining the Moonbirds community, given that IP ownership has been a key cause of contention in the NFT sector in the past.

Moonbirds can be purchased and sold in a variety of places.

Moonbirds are currently available for purchase on most major Ethereum NFT exchanges, including OpenSea, LooksRare, Rarible, and others. Moonbirds aren’t cheap, and the lowest price of any Moonbird accessible as of April 28 is a whopping 30 ETH (about $88,000).

However, it’s feasible that the investment will pay off in the long run. Moonbirds will undoubtedly experience a similar ebb and flow in popularity as Bored Apes and CryptoPunks have, and the Moonbirds team appears committed to expanding out the project for the long haul.

Moonbirds is now well-funded, with 100% of the proceeds from the project’s primary sales going straight to Proof’s holdings, with plans to grow the project’s crew and develop new items. With 5% of all secondary sales going to project development and the fact that Reddit’s founder is now engaged, it appears that things are only going to get better for this collection of prized pixel-art owls.

How do the in-game economies of crypto games work?